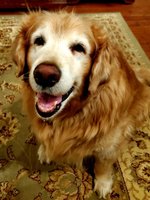 Charlie was a foster dog from Delaware Valley Golden Retriever Rescue; we first took him into our home in July of 2010, and he was having such horrific cluster seizures at the time that DVGRR gave him 2 weeks to live, and then said if we could get him stabilized he probably had a maximum life expectancy of 5 years due to all the brain damage he had incurred as a puppy with the initial seizures.

We fell in love with “Nothing but Love Charlie” (my nickname for him, because he was definitely not the smartest or most energetic Golden Retriever out there - but his heart was 10 times the size of any other dog I’ve ever owned) from the get-go and ended up “foster-failing” and adopting him ourselves. He made it all the way past 10 years old, so I think it’s fair to say he beat his original odds, and ended up living a wonderfully happy life.