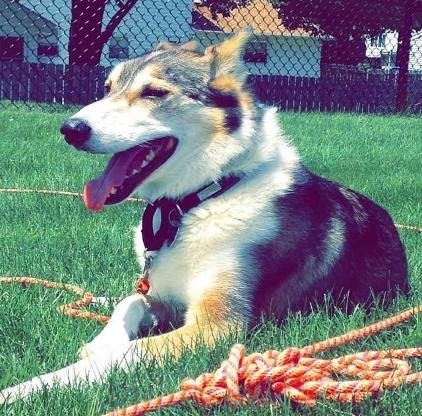 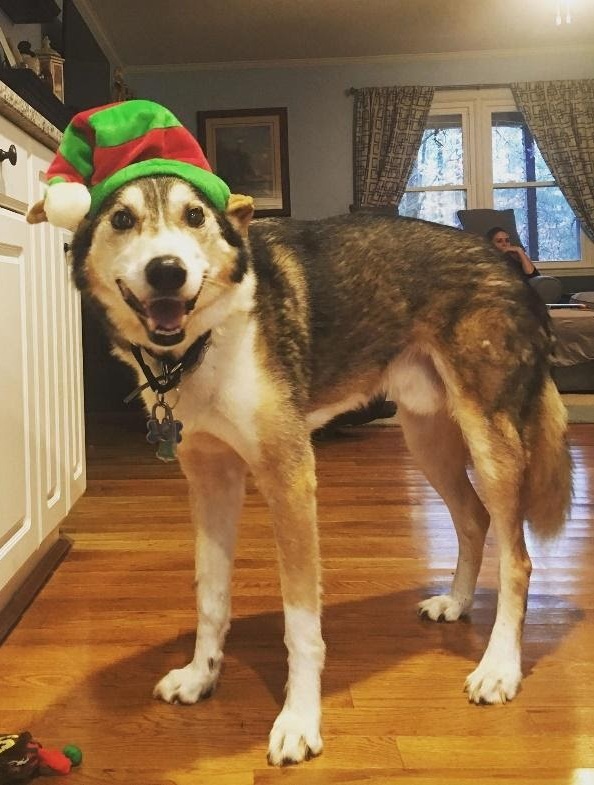 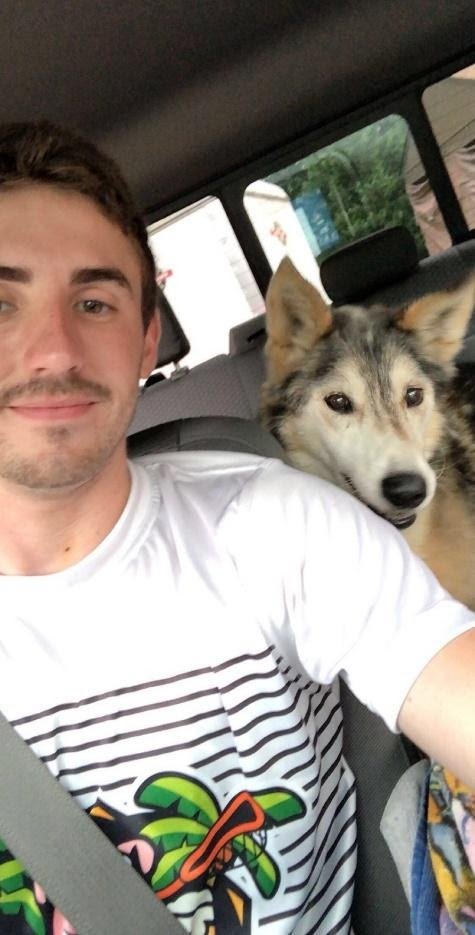 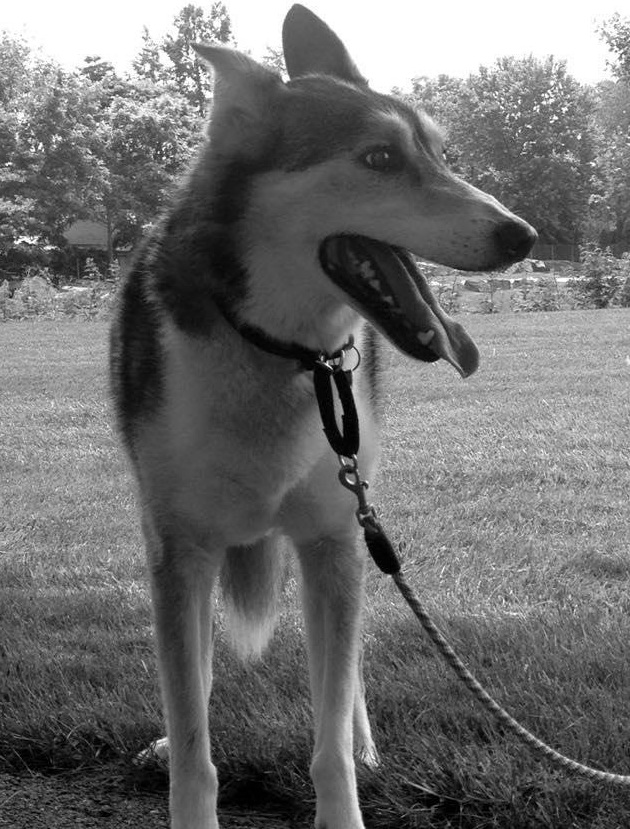 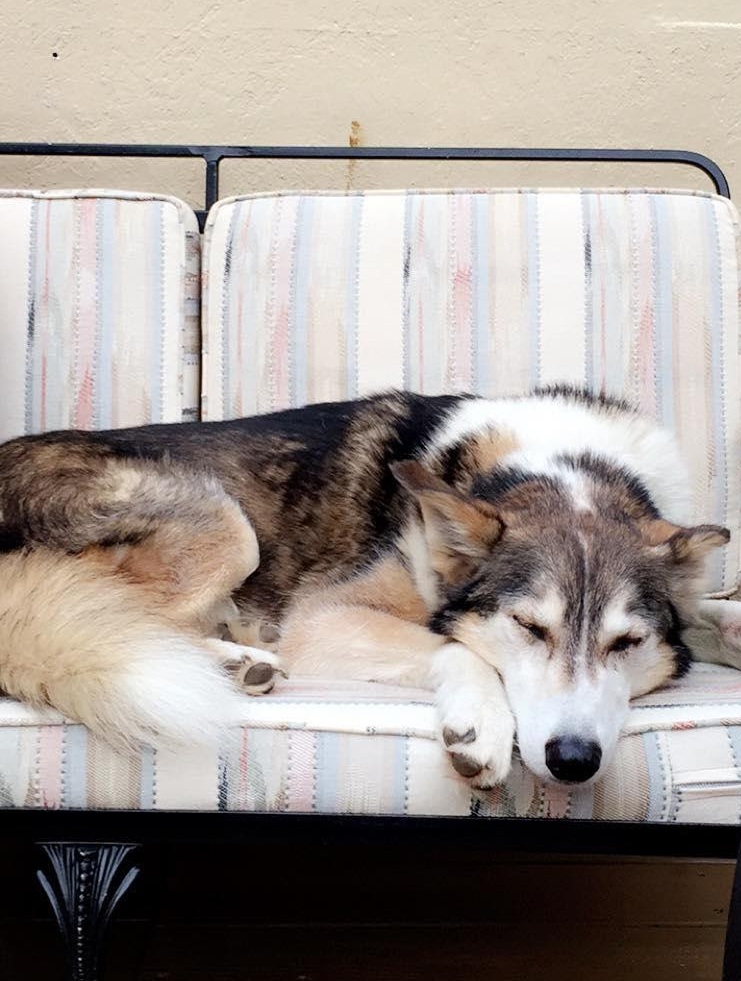 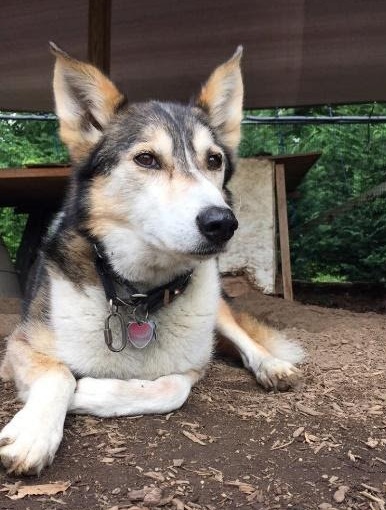 Manny came to us as a rescue dog that we fostered. He was taken from a home in Buffalo, NY, where they confiscated over 90 dogs that were chained up outside. Living in inhumane conditions, he came to us weighing around 35 pounds and very malnourished. He was a big tall Alaskan Husky, just skin and bones when we got him. Eventually, we realized that we couldn’t give him up as he adapted and became part of our family quickly. We ended up adopting him, and through the rescue agency, they asked us to pick a name in the minerals and gems category that started with the letter U. Looking at a list of possible names, there it was, Ullmannite. Calling him Manny for short really stuck.

Manny was about 6 years old when we rescued him. He’s been a part of our family for 10 years and really brightened everyone’s day. He was the gentlest dog, especially given his background. He was great with little kids and other dogs. Before he got too old for the dog park, we would take him almost every day, sometimes twice a day. He loved to run around and usually mind his own business there. Manny got close with the other dogs in our family and accepted them all as part of his pack. Anytime at the dog park, he would protect the other dogs in our family if another dog was playing too rough. Always nearby keeping an eye to make sure everything was going alright.

He isn’t your typical dog to greet you at the door when you come home. You can find him lying on his bed inside when you come in the door. He would peek out the windows as you come home but not often go crazy when you get home. He would sometimes get up to see who came in or say hi, but then shortly after that, go back to his bed. We’ve never heard him let out a real bark. He would often check in on other people in different rooms to make sure everyone was still there. He loved the outdoors, and we gave him plenty of that.

We fed Manny raw meat for a long time until he started to get too old for raw. At that point, we switched to cooked meat. He knew he had it made and was getting spoiled because he started to get picky with his food, only eating when he was hungry. With other dogs in the family over to visit, when it came time to eat, he would let the other dogs eat first and not be bothered if they stole his food. He knew what it was like to be without food for a while from his background, so he was very docile with his food around other dogs and people as he felt he could wait. On another note, he won a hot dog eating contest, which was “bobbing for hot dogs.” It was an event where hot dogs were underwater, and the dogs are timed individually to see how long it takes them to eat all of the hot dogs in the water. They had 1 minute to eat 10 hot dogs. Manny crushed the competition and bobbed for all the hot dogs the fastest in 37 seconds!

From where he’s come from before we got him, we know that he probably enjoyed having us as his family much more than we’ve enjoyed having him. It warms our hearts to know we’ve given him 10 long years of love and affection, which must mean a lot to a dog like him. We’re going to miss our Manny-boy very much, and he’s shown us how much he’s appreciated us. He passed in his own home on his own bed with his beloved family right by his side.

Share Your Memory of
Manny
Upload Your Memory View All Memories
Be the first to upload a memory!